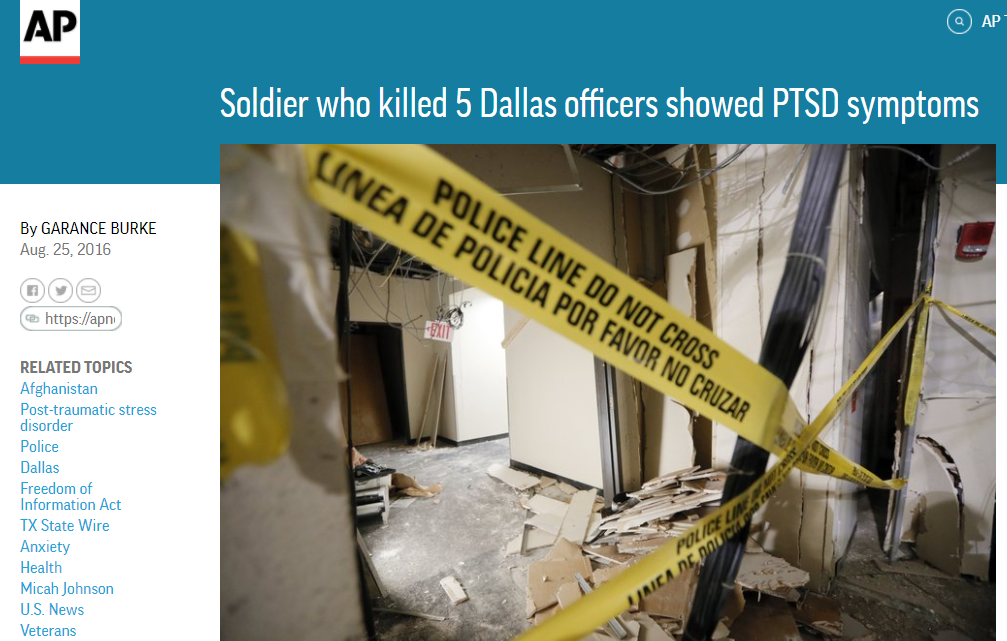 A former soldier killed five Dallas police officers in July, 2016 during protests after returning overseas on duty. Information about the case was obtained through The Associated Press by the Freedom of Information Act (FOIA). This act allows the public to access data and reports if the information does not contradict any of the exemptions that are set beforehand by the act.

AP News reported the story of the veteran that was experiencing post-traumatic stress disorder (PTSD) before the murder. It is proven that the 25 year-old man, Micah Johnson was seeking assistance for his anxiety and depression but physicians didn’t think he was at risk of harming himself or others and therefore did not act on his concerns.

Reporters at AP News got their hands of records on the case thanks to the FOIA that stated Johnathan experienced an anxiety attack that required police and made Jonathan feel like, “My heart felt like someone was pinching it while it was beating fast.” Yet even as the soldier told this to doctors, no one diagnosed him with PTSD, something like this discovery could have saved the policemen’s lives.

When I initially finished reading this story, two thoughts came to me:

1) How did the reporters get records of a patient’s health information? Doesn’t this violate exemption 6 of the FOIA which states the FOIA, “Protects information about individuals in personnel and medical files.”

2) Are doctors really the ones to blame for allowing him go out in society? I try to say this with little bias because I’m conflicted with what I’m supposed to think since I try to look at each situation from every angle and give the benefit of the doubt. Why would doctors be dishonest in saying Jonathan was not a harm to himself or society? I don’t think  he was a glaring warning sign to any of these doctors hence them letting go. However, they should have listened to Jonathan’s concerns more carefully and maybe prescribed him medication if symptoms persisted.

Coming from a potential future doctor, I fear ever letting a patient leaving my presence without making an effort to make them feel better. So perhaps Jonathan was at a disadvantage.

Aya is a freshman at the University of Michigan-Dearborn majoring in Behavioral and Biological Sciences on a pre-med track. She is a pediatrician in the making and has a long way to go to accomplish her goal. She enjoys spending time with family, watching movies, and learning about anything and everything. Stick with her on the journey! View all posts by Aya Nasrallah