I started following the University of Michigan Men’s Lacrosse Team on Twitter.

I have been to a few lacrosse games, and was surprised by how excited I was. I only discovered the game of lacrosse five years ago.

During the Senior’s Game, on April 21st, UofM played against John’s Hopkins and lost by one point, 30 seconds before the game ended.

The UofM Lacrosse Twitter feed has gotten a lot better over the years. Their media presence has been a lot better, and includes comedic gestures. For example, a play on the player’s last name’s were used for Valentine’s Day cards.

Snapchat is an amazing social media platform. While the deletion of messages/pictures was originally intended for “sexting,” Snapchat has grown to so much more.

Keeping in touch with your friends is something humans have been doing for ages.

Snapchat is a quick way to send friends messages and keep them posted on your day to day life without the slower connection of texting. Snapchat, however, does tempt people to do worse things, in my opinion.

With the knowledge that messages/pictures disappear, the increase of threats, whether they be towards individuals, schools, and bullying, are on the rise.

While there has been some bad produced, Snapchat is a fun fast way to keep in touch with friends. It’s also very addicting! 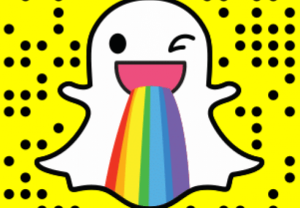 With the ever so rampant exposure to the lack of privacy, I choose to not include a lot about myself, online.

While I try and stay anonymous, online, there are individuals who post things about me.

Here, for example, is a time when I was at Wayne Statue University, recruiting for Crain’s Detroit.

Saudi Arabia is known as a very conservative country, so I was shocked to see that they had their first Fashion Week, recently.

Fashion Week revolves around the expression of clothing which, in Saudi Arabia, has been blocked by the government to be mainly black modest clothing.

Though, Saudi Arabia did stick to its true nature and ran on “AT,” better known as Arab Time, and launched two weeks after the planned date, due to logistical reasons.

There are many shows/movie, in today’s day, that emphasize survival during outbreaks. There is a plethora of movies that show this like Outbreak, Contagion, The Walking Dead, and Quarantine. The entertainment industry has romanticized outbreaks, in their many forms, but is any of it legitimate?

Outbreaks are a popular fear among individuals, but is this fear validated. In the Washington Post article, Five myths about outbreaks, we learn five myths that debunk the idea of the popular franchise of outbreaks.

The myths are as follows:

While we may be closer to a zombie outbreak than we think, some individuals have taken a look at what may start said outbreak. YouGov.us reports the following results of a poll, in their article The Zombie Apocalypse, of what will most likely cause a zombie outbreak.

“As for why there would be a zombie apocalypse in the first place, it’s a close choice between “A scientific experiment gone awry that turns humans into zombie-like creatures” (19%) and “The spread of a parasite that turns its victims into zombie-like creatures” (17%). Least popular reasons: “A toxic chemical spills into the ground and causes the dead to rise” (8%), “There is no room in hell, so the dead have to roam the Earth” (4%), and “The dead have nothing better to do than rise and attack” (3%).”

There are many tools that are used to collect data, from many sources. One tool that I took an great interest in was Ushahidi. This is an amazing website because it collects data via cell phones to map out where events are happening. This is great because most people have a cell phone. I really liked how Syria Tracker, a humanitarian website, utilized Ushahidi to show reports of different issues occurring to Syrians i.e. the spread of disease, chemical poisoning, and missing/detained individuals. This source gives the ability to get the real story from those who have a cell phone.